Bisinella Developments - The key to your community 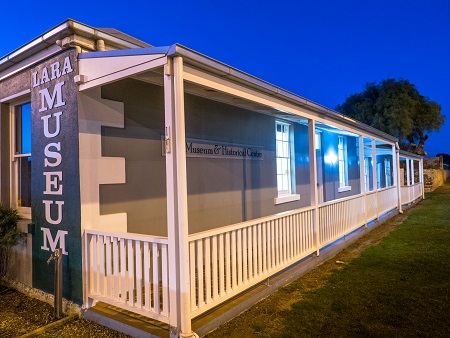 The opening of the Lara Museum and Historical Centre in 2013 is a story about community spirit.

It is also an example of Lino Bisinella’s ongoing contribution to preserving Lara’s heritage.

Through the passion of the Lara residents to preserve and celebrate the town’s history and the unwavering support of Lino, the Lara Museum and Historical Centre on the corner of Forest Road and Canterbury Road West, was officially opened on April 18, 2013.

Its opening was the culmination of more than three years of planning and hard work by the people of Lara, Lino and the rest of the team at Bisinella.

Long-time Lara residents and friends Ian Board and Les Kelly had often discussed the need to preserve Lara’s history and the lack of any facility to collect historical material and make it readily accessible to the public.

In mid-2011, Ian and Les heard that the former Lake Bank Hotel property had been sold to Lino, Bisinella’s Managing Director.

The Lake Bank is Lara’s only surviving 19th century hotel.  One of Lara’s oldest buildings it was built in 1860 for Scottish immigrant James Henderson and operated as a licensed hotel until 1909. The landmark limestone building with the distinctive stone fence, located on the corner of Forest Road and Canterbury Road West, was purchased from John “Jack” and Brenda Darcy in 2010. It had been home to Jack’s family for five generations.

Ian and Les approached Lino about the possibility of using the historical buildings as a community museum.

Lino quickly gave Ian and Les his commitment that, provided they could muster sufficient community enthusiasm and support, he would fully renovate the historic buildings at his own cost and donate the former Lake Bank Hotel to the Lara community for use as a historical museum.

A public meeting was held in September 2011 to gauge public interest and a provisional committee of eight was elected to start work.

The Lara Heritage and Historical Inc was incorporated on January 12, 2012.

Lino set about personally overseeing every single detail of the somewhat challenging renovation project. It was very much a labour of love.  The building was lovingly restored and refurbished at a cost of about $500,000. Bisinella Developments then leased the property for a $1 a year to the local community group formed to operate the museum.
Ian, Les and their members worked closely with Lino and the Bisinella team throughout the renovation project.  At the same time they started the process of collecting historical information and items from the community.

Since it opened memorabilia and items of historic interest have continued to be loaned or donated to the museum, bringing local history to life in the ideal setting of the old limestone buildings.

The Lara Museum and Historical Centre is open to the public from 11am to 4pm on Wednesdays and Sundays. Group bookings are available by appointment. For more information visit www.laramuseum.org.au