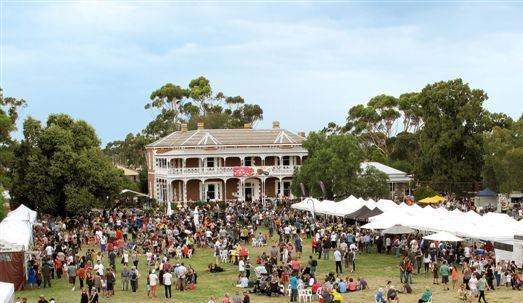 Cooking demonstrations, a cook-off and the chance to sample some of the region’s finest food and wine were just some of the highlights from this month’s Lara Food and Wine Festival.

Pirra Homestead was once again turned in to a food and wine lover’s paradise with more than 70 exhibitors showcasing their produce at the annual Lara Food & Wine Festival on Sunday, March 24.

Food and wine enthusiasts from near and far, flocked to the grounds of the magnificent 19th century mansion, sampling goodies from stall holders and enjoying picnics on the grass.

Bought by Bisinella’s Managing Director Lino Bisinella in 2006, Pirra Homestead was built between 1880 and 1882. Following the purchase of the property, Mr Bisinella oversaw a six year restoration of the building which meticulously restored Pirra to its former elegance.

Bisinella proudly donates use of Pirra Homestead for the annual Lara Food & Wine Festival as well as the Lara Fun Run/Walk and the Lara Carols.

Celebrity Chef Iain ‘Huey’ Hewitson, known for his shows such as Healthy, Wealthy & Wise, Never Trust a Skinny Cook and Huey’s Kitchen, was also on stage presenting the crowds with some of his simple, yet special recipes that are easy to recreate at home.

Other highlights included local chefs mentoring The Gordon VET in Schools culinary students in a Master and Apprentice cook-off.

The family-friend festival also was a Cheese Champion Competition display with local cheesemakers competing to win the title of Best Cheesemaker.

The Artisan Smallgoods Award, in memory of the late renowned Lara smallgoods maker Angel Cardoso, was another feature of the festival.

Members of the public were also treated to a heritage display inside Pirra Homestead with the two front rooms set in a “Breakfast at Woodlands” theme.

The display paid tribute to the role Pirra Homestead, or Woodlands as it was originally called, played as a hospitality venue for the wealthy in the late 19th century.

Door prizes included a fabulous foodie holiday valued at $3000 and sponsored by All Things Travel Lara.